Where we are &amp; Discover Irpinia Irpinia with 117 Municipalities, having Avellino as its capital, is the largest province, by extension, of Campania. Its nearest airport is Capodichino (Naples International Airport), which is 40 minutes away. For tourists there is also the possibility of arriving by ship with the nearest ports of Naples and Salerno . The railway stations of Naples, Afragola, Caserta, Salerno are 30/45 minutes away. By car A16 "Napoli - Bari" motorway, the exits are Avellino Est or Avellino Ovest. In Irpinia we are happy to welcome you and make you feel at ease. We are happy to open the doors of our territory, an authentic and truthful territory. A territory still intact and according to our visitors fantastic and genuine.

Irpinia has been defined by some as the Ireland of Italy, by others the Switzerland of Southern Italy for its natural beauty, beautiful villages and landscapes immersed in the mountains. Here are some photos but there is so much to discover ... (Plain of the Dragon) (Irpinia and its mountains with hiking trails) The quality of our producers and the excellence of our wines ...

Irpinia is the first area of ​​Southern Italy to have had the DOCG in 1993 with TAURASI, in 2003 with FIANO DI AVELLINO and GRECO DI TUFO; still today it is the first to boast three DOCGs. In 2020 the whites of Irpinia "Fiano di Avellino" and "Greco di Tufo" reached another milestone, with the possibility of adding the wording "Riserva" on the label. This victory makes us understand the importance of Irpinia wines, not only of Taurasi but also of Fiano di Avellino and Greco di Tufo because our whites are long-lived. We recall that the Taurasi already had the "Reserve".

Those who come to Irpinia can taste at least 80 Taurasi different from each other, 60 Fiano di Avellino and, equally, 50 Greco di Tufo. Different in characteristics from vineyard to vineyard, from exposure to the sun, from the climate that changes within a few kilometers, from the processing and the philosophy of the cellar; each with its own personality. Behind every bottle of wine that arrives on our tables there is so much to discover starting from those who work it. Wine is not only "alcohol", but it is culture, it is knowing a territory, the history, the tradition of the place. A territory rich in traditions

Irpinia is not only a land of wines, with its production of hazelnuts and chestnuts it is called the capital. Irpinia is also known for the production of nougat, cheeses, cured meats, coppery onion from Montoro, figs from San Mango sul Calore, broccoli from Paternopoli, Quarantino bean from Volturara and Quagliettani peppers from Calabritto and Senerchia. Irpinia is also a land of mushrooms and truffles. In Irpinia we also have an olive oil specification that includes 38 municipalities. Bisaccia: the Ducal Castle and the Archaeological Museum

The Ducal Castle of Bisaccia stands on a spur of Mount Calvario. It was built by the Lombards around the second half of the eighth century. The first historical information dates back to 1077, in a deed of donation a certain "Riccardo baron of Bisaccia" is mentioned as the owner of the fief. The Lombards ruled Bisaccia until the arrival of the Normans led by Roberto d'Altavilla. Destroyed by the earthquake of 1158, it was rebuilt towards the end of the 13th century by Frederick II of Swabia. It was the turn of the Aragonese and in 1462 Bisaccia passed to Isabella, wife of Frederick of Aragon. Towards the end of the 16th century the Castello di Bisaccia belonged to GiovanBattista Manso, a friend of the famous poet Torquato Tasso, who stayed there in 1588. Recently a museum has been inaugurated that shows various archaeological finds including those of the "Tomb of the Princess of Bisaccia" , referable to the Iron Age (late IX-VII century BC). The "Tomb of the Princess" was distinguished from the others above all by the precious trousseau, embellished with valuable ceramics and jewels, elements that indicated a person of high rank.

Gesualdo: the Castle and the medieval village

The castle, located in an elevated position of great strategic value on the northern bank of the Fredane, was built by the Lombards and became one of the greatest fortresses in Irpinia. At the foot of the manor the inhabited area gradually formed, of which we have news for the first time in a document of 1078, when it was Signora Gugliemo di Gesualdo. After various vicissitudes it passed to the Prince of Venosa Carlo Gesualdo. Man of the Late Renaissance, remembered in local historiography for having been the instigator of the double murder of his young wife Maria d'Avalos and her lover Fabrizio Carafa. Protected by influential men and to escape the revenge of the brutally killed relatives of his wife and lover, he took refuge in the Castello di Gesualdo, where he devoted himself to music composing numerous madrigals in the last years of his life. The manor was transformed by the latter into a sumptuous noble residence on the occasion of his second marriage with Eleonora d'Este. The castle at present is characterized by a rectangular plan with cylindrical towers, balconies and windows made in the nineteenth century. 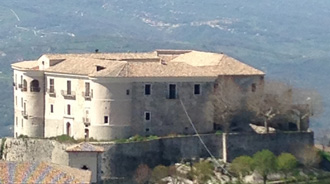 The imposing manor rises at an altitude of about 453 meters to guard the valley crossed by the Ufita river. Over the centuries it has belonged to the various feudal families that have succeeded one another in the area such as the d'Aquino from which it will take its name. Landolfo d'Aquino obtained it in 1229 and the Castle will serve as a symbol of his power. Since its construction in the 12th century , the manor has undergone several restorations and renovations making it increasingly suitable for protecting the town from enemy attacks. Recently restored, today the castle recalls in its grandeur the great work of those men who contributed to its construction during the twelfth century and certainly represents one of the most fascinating monuments of Irpinia. In addition to being a beautiful place to visit, the Castle is also home to the interesting Antiquarium Museum and houses the Library. The museum preserves prehistoric finds such as fragments of fern or impasto pottery; Roman finds such as the head of a well-known male figure of the imperial age I century. after Christ which was found in the garden of the Castle; there is also a modern section with postcards dated between 1900 and 1925 and the documentary exhibition on the illustrious priest Pietro Paolo Parzanese. 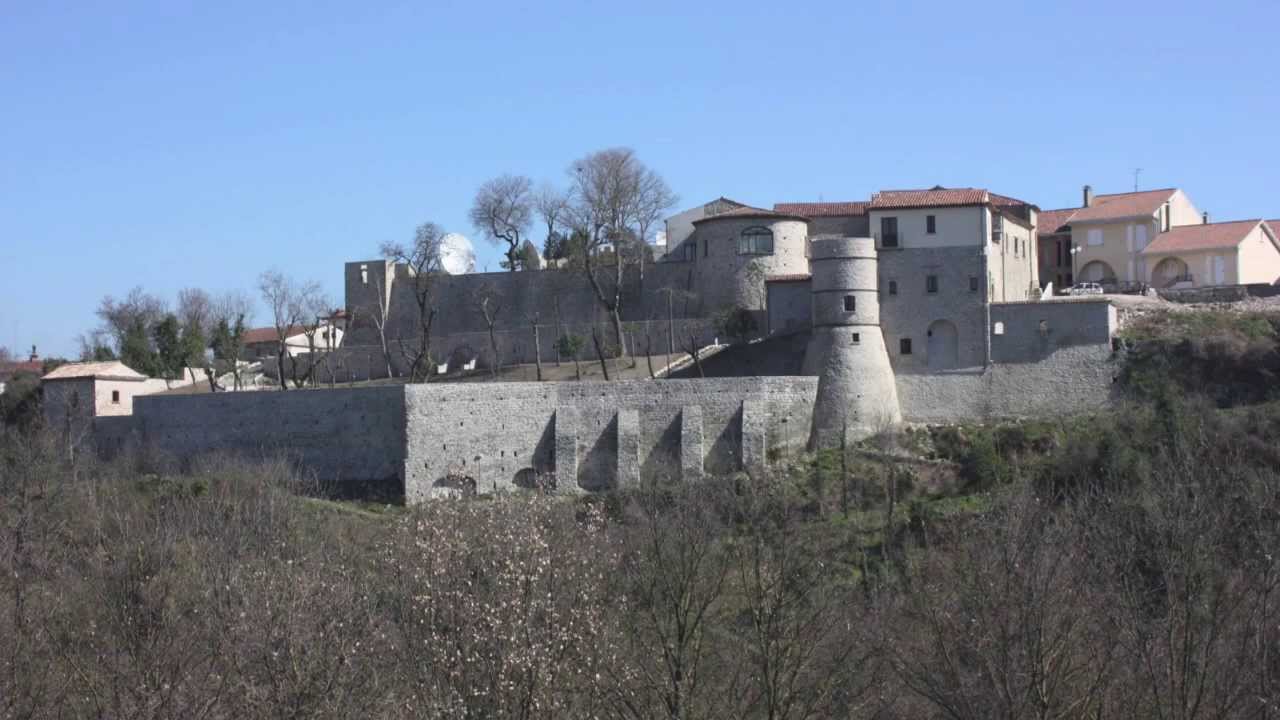 The first news on the existence of the Filangieri di Lapio Castle dates back to 1130 when Ruggiero made a deed of donation in favor of the monastery of Montevergine. The military defense castle of the medieval village was transformed by the Filangieri into a residence. Over the years the manor has been further modified: the interiors have been divided into numerous rooms. Today only a quadrangular tower remains of the Norman fort. The castle is accessed through a majestic arched portal of the sixteenth century , surmounted by the coat of arms of the Filangieri family. Inside you can admire the splendid frescoes of the '500. The Castle will soon be restored to give it back to the many visitors that the town of Lapio hosts every year. 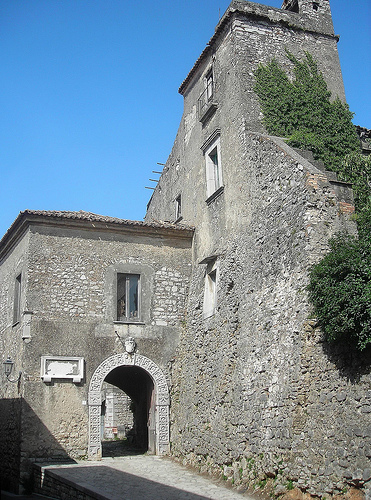 A few kilometers from Avellino you reach Atripalda, a city that developed around the specus Martyrum (4th century) and the castle of Truppoaldo from which it took its name (10th century), boasts a millenary history that has its roots in the city of Abellinum of which conspicuous testimonies come to light in the locality of Civita.
Feudo dei Capece (Marino and Corrado in October 1254 guided King Manfredi in his escape to Lucera and hosted him for a night in the castle of Atripalda) and then of the Orsini, the city recorded since the fourteenth century. a notable economic development that favored the urban expansion and accentuated the reasons of friction with the nearby Avellino.
With the dominion of the Caracciolos (1564-1806) who established their residence there in an imposing palace, whose mighty late Renaissance structures and a wonderful park can still be admired today, Atripalda experienced one of the most intense periods of its history. In 1585 the church of S. Ippolisto, built since the 12th century. on the specus Martyrum, it gained the longed-for autonomy from the Avellinese clergy, while the Caracciolos gave particular impetus to economic activities (strengthening customs and developing, along the course of the river Sabato, the industries of iron, paper and especially wool) and life cultural (supporting the Accademia degli Incerti with enlightened patronage).
Between the end of the sixteenth and eighteenth centuries. the city assumed the urban layout that it would have kept until the second half of the nineteenth century: in particular the S. Maria road where the homonymous church stands, annexed to the convent of PP. Dominicans (XII-XVIII century) was enriched with noble palaces and beyond the river Sabato the convent and the church of S. Giovanni Battista were built (late XVI century). During the nineteenth century. Atripalda developed beyond the river Sabato, towards the large market, where a new customs house was built. Severely damaged by the earthquake of 23 November 1980, the city has experienced a significant demographic increase in recent years, further strengthening its ancient commercial vocation.

Leaving Atripalda in a few minutes you reach Cesinali. Here you can admire the Church of San Rocco and the Parish Church of San Silvestro, as well as Palazzo Cocchia and Palazzo Del Franco, before dedicating oneself to visiting the first winery.